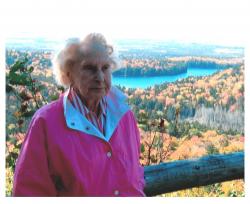 It is with heavy hearts and love that the family announces the peaceful passing of Edythe “Peggy” Aileen Belyea of Hartland on Saturday, October 5, 2019 at the Central Carleton Nursing Home. She was born in Hartland May 3, 1917, daughter of the late Herbert and Vella Aiton. She was predeceased by her husband, Neville “Bud” Belyea and sister, Dazie Rouleau.

At the time of her death, Peggy was Hartland’s oldest citizen at age 102. She lived a full and active life, enjoying camping, travel, gardening and family. She was especially famous for her brownies and banana squares which travelled to her grandchildren in various parts of the world. For many years she was employed as payroll officer for Day & Ross Ltd. An avid volunteer, she was recognized for her outstanding hours of service to Central Carleton Nursing Home.

The Belyea family thanks every member of the CCNH staff for their care, compassion, professionalism and friendship over the years of Mum’s stay. We will always treasure how they became part of our family. Thanks also to Dr. Stocek for his care and devotion to Mum and our family.

Visitation will be held on Friday, October 11, 2019 at the Britton Funeral Home (brittonfh.ca), 2 High Street, Hartland from noon until 1:45 p.m. The funeral service will follow the visitation at 2:00 p.m. with Rev. Michael Goodfellow officiating. Interment will be in the Greenwood Cemetery in Hartland. Memorial donations may be made to the Greenwood Cemetery, Central Carleton Nursing Home or charity of choice.