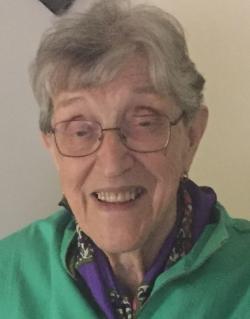 Mary Hayward was old-school in the best and truest sense of the word: she read the Bible, spoke her mind, and maintained a hard-pew work-ethic. For decades, she walked miles to work along the banks of the Saint John River, through summer heat and winter blizzards. She saved her pennies, and ran an Eatons catalogue order office with efficiency and care, totting up company accounts in hand-written ledgers.

Mary, known to family as Mimi, was born and raised in Simonds, a rural hamlet just outside Hartland, a New Brunswick town best known as the home of the world’s longest covered bridge. Along with her brothers and sisters, Mimi was taught the value of hard work and economy by her extended family, a clan of lumberjacks, carpenters and farmers.

The Hayward family was defined by toughness, character and flinty independence. As a child, Mimi watched as her grandfather’s legs were amputated on the kitchen table by the town doctor following a sawmill accident. Mimi’s father built furniture in the dirt-floor basement, and her mother collected miniature china shoes. The dinner table was home to spirited debates. Mimi’s cousin, Richard Hatfield, became a political star, and rose to premier of New Brunswick.

When her parents died, Mimi bought their house and carried on. In the 1970s, Mimi’s life changed when Eatons shut down its Hartland catalogue office. Mimi moved to Toronto, landed a job as a book-keeper for a Baptist Church organization, and set up a small apartment that would be her home for nearly 40 years.

Mimi never married, and never had children, but she was a den-mother. To keep her mind sharp, Mimi memorized birth dates and anniversaries. She could recite them for hours, and she loved to send hand-written birthday cards to her many nieces and nephews and their growing clans.

Mimi took pride in family, and in living within her means: she saved for retirement, and spent modestly. She loved buying records and playing them for young relatives. As a young woman, Mimi performed with a New Brunswick singing group. She collected family pictures and kept them in neatly catalogued albums, with names and dates written on the back of each image.

Mimi lived out the last decades of her life in Canada’s biggest city, yet her high-rise apartment was a microcosm that preserved her small-town values. Her mother’s miniature shoe collection was arranged in a cabinet, always carefully dusted, just as it had been since Mimi was a little girl.

Mimi’s independence was often a challenge to others. As her health declined, she refused to move to assisted living, despite the admonitions of her doctors and her family. A long series of falls left her with broken bones and severely restricted mobility, but Mimi refused to move. When she finally moved to a nursing home, it was late in the game. When Covid 19 hit her facility, 53 residents died. Mimi contracted the virus, yet survived.

The end came after she was sent to hospital for emergency surgery. Against all odds, she survived the operation and lived on for more than two months. On the morning of July 26, Mimi died peacefully in her sleep. She is returning home to Hartland for her funeral and burial service. Funeral arrangements are in the care of The Britton Funeral Home in Hartland.

Visiting hours will be held on Wednesday, August 5th from 1:00 to 1:45 p.m. The funeral service will follow at 2:00 p.m with Pastor Michael Horsman officiating. Due to COVID restrictions distancing is required. Mary will be interred alongside her parents in the Greenwood Cemetery in Hartland. In lieu of flowers, donations can be made to the Greenwood Cemetery in Hartland. www.brittonfh.ca 506-375-4343
Service Date
Wednesday, August 5, 2020