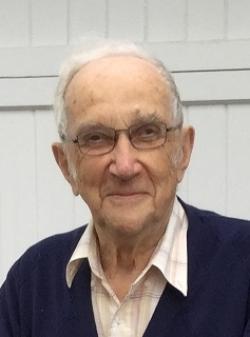 George Hatfield Hayward of Fredericton passed away on June 10, 2021 at the age of 93.  Husband of Maxine (Shaw) Hayward for 73 years, George was born June 25, 1927 at Middle Simonds, Carleton County, N.B. to the late William and Dora (Hatfield) Hayward.

His 30-year career with CMHC took him and his family to several communities across three provinces, finally settling in Fredericton in 1981.  George was well known in the genealogy community as a tireless and meticulous researcher publishing more than twenty New Brunswick family histories and contributing to numerous genealogical journals. He was a George of all trades and master of most - including, but not limited to, farmer, woodsman, soldier, mechanic, carpenter, draughtsman, cabinet maker, finance manager, genealogist, editor, author, and computer wizard.

In addition to his wife, Maxine, he is survived by his daughters Suzanne (Alan) Whitehorn of Kingston, ON and Beverly (Harold) Andrews of Fredericton.  Granddaughter Kate (Roger) Whitehorn-Phillips and great-grandchildren Amelie and Lachlan Phillips, Milton, ON.  One sister, Jane Hovey of Woodstock, NB.  Sister-in-law Muriel Shaw of New Minas, N.S. and many nieces and nephews and their families.

In keeping with George’s wishes, there will be no visitation or service.  Interment of his ashes will take place at Greenwood Cemetery, Hartland, NB at a later date.  Arrangements are being handled by Britton Funeral Home, Hartland, NB.

For those who wish, remembrances may be made to Greenwood Cemetery, Hartland, NB. Personal condolences may be offered through www.brittonfh.ca