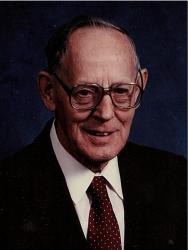 Rev. Norman Wallace MacKenzie of Bath passed away on Wednesday, January 21, 2015 at the age of 102. He was born in Nerepis and was the son of the late David and Amelia MacKenzie. He was predeceased by his two wives, Vivian and Winona; a sister, Pauline Bell; two brothers, Ralph and Harold; stepson-in-law, Richard Bell.

Resting at the Bath Baptist Church, Main Street, Bath with visiting hours on Friday, January 23rd from 1 to 4 p.m. The funeral service will be held on Saturday, January 24th at11:00 a.m. from the church with Rev. Toben Steeves officiating. Interment will be in the Pine Tree Cemetery in Bath. If so desired, donations can be made to Shiktehawk Bible Camp, The Bath Baptist Church or the CNIB. Arrangements have been entrusted to the Britton Funeral Home, High Street, Hartland. www.brittonfh.ca